X-Beer33 – the strongest beer in the world

X-BEER Mini-brewery “U Medvídků” is at present the smallest Czech restaurant brewery. Because we like challenges, we got the idea to try to brew, on the contrary, the strongest beer in the Czech Republic. And in that way X-BEER, semi-dark special was born.
X-BEER is produced by traditional technology, using special procedures at different phases of production of beer. Used for the production is the Plzeň malt and caramel malt in the maximum quantity that we are still able to mash. How we achieve the high extract of the original hopped wort, will remain our secret, however, we may disclose that the high strength is achieved from barley malt only. The main fermentation proceeds in open oak fermentation tanks for 14 days. End fermentation proceeds in oak barrels for 14 weeks and then, after adding a special yeast strain, secondary fermentation proceeds for another 14 weeks.

Under the conditions of “manual” production of beer of our brewery each brewing of produced X-BEER is an original that will differ by strength. The premiere brewing has the marking X-BEER 30 which means that we produced the so-called thirty with the content of alcohol of 11.8%. From the first brewing we bottled only 500 bottles, each of them will bear its original number. The second brewing in which the phase of end fermentation started, will probably have the name X-BEER 32. We will know the exact name only on filling into bottles after the performance of the laboratory analysis.

X-BEER is beer that has no equivalent in the Czech Republic. It is remarkable by the natural malt taste with a pleasant bitter after-effect. The high content of alcohol and sugar together with higher hopping, speed up markedly the absorption of alcohol to the blood. Therefore, we recommend cautious consumption It is suitable to serve X-BEER, according to our slogan presented on the label of X-BEER, to desserts or separately as digestive. 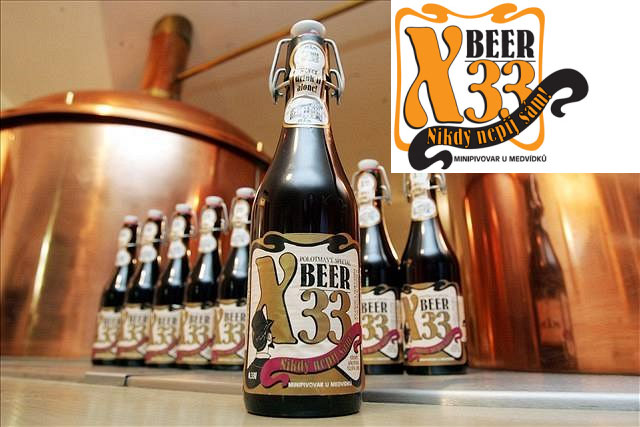 X-Beer33 – the strongest beer in the world!